World Day Against the Death Penalty:No silence over executions in Iran

In the occasion of World Day Against the Death Penalty Mrs. Maryam Rajavi in her twitter announced: 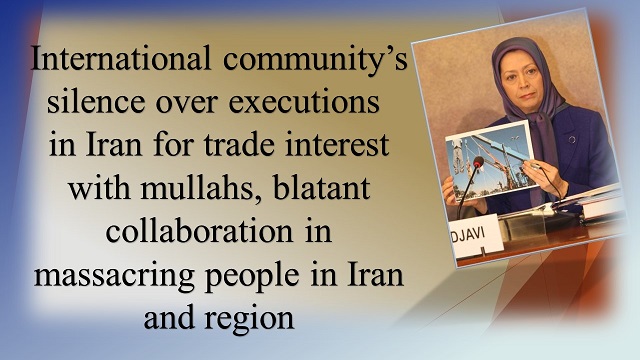 International community’s silence over executions in Iran for trade interest with mullahs, blatant collaboration in massacring people in Iran  and region

Despite the July 14 Iran nuclear deal, the Iranian regime is continuing its "unacceptable" use of the death penalty. European Parliament President Martin Schulz's upcoming visit to Iran is the perfect occasion for him to take a stand, writes Belgian MEP Gérard Deprez, chairman of Friends of a Free Iran in the European Parliament.

"This time last year, European Parliament President Martin Schulz wrote to the speaker of the Iranian parliament, expressing grave concern about 26 year-old Reyhaneh Jabbari, who had been sentenced to death for defending herself against sexual assault by a government security official," Mr Deprez wrote on Friday for Euractiv.com.

"Mr Schulz asked for a 'fair retrial, in line with well-established universal standards, and without recourse to the death penalty.' However, Ms Jabbari was sadly hanged two weeks later despite a worldwide campaign to save her."
Click here for details
Posted by Freedom for Iran at 1:14 AM